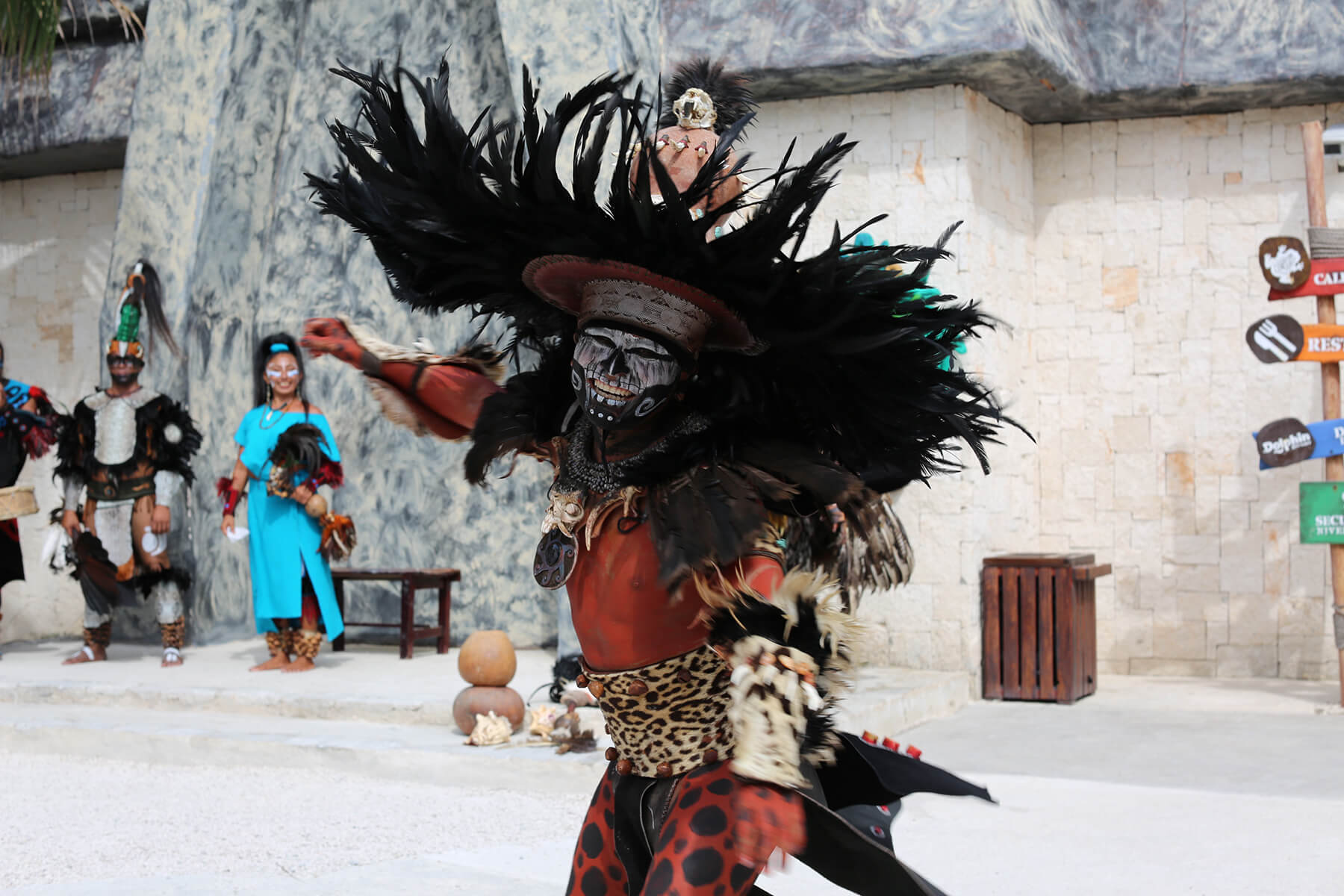 I saw them there in the morning when I was walking out of the pier and inside the port in Costa Maya, it was difficult not to see them dressed in those magnificent armors and dancing to the beat of drums and ancient songs. -Mayan dancers- someone said, but for me they looked like the Mayan warriors I used to see only in pictures.
One of the dancers, the leader, was dressed in an astonishing owl costume, moving his wings as if he was about to catch a prey. It was a picture I will remember for life.
I had less than 5 minutes to take photos, since I had booked a tour to the Reef and the bus was about to leave, so I took a bad picture of them and wished, with little hope, for them to be there after I returned from the tour.
My day went better than expected. The reef in Mahahual is filled with colorful fishes and our private beach had the smoothest sand I have ever felt under my feet. But the best part of my day was when I returned to the pier 8 hours later and the Mayan dancers were still there, happily amusing people with their mysticism and the same smiles and energy that called to my attention in the morning. How do they keep that incredible high energy?
Getting close to them gave me goosebumps, as if I was next to a group of supernatural beings, and in a certain way I was, as I discovered later when talking to this group of Mayan dancers called The Nahuales.
According to the Mayan tradition Adrian the Owl shared with me, a Nahual is a human being who has the power to transform either spiritually or physically into an animal form. All the male dancers were dressed as animals, whereas the women were dressed as Mayan princesses.

The spiritual leader of the clan, a wise man that brings to the living the messages from the death. A figure that symbolizes life for his own people but also death for the enemies.

The strength of the warrior comes from this animal. Symbolizing the ferocity of the jaguar, these dancers fight and dance showing us their colorful costumes filled with stones and natural fabrics.

The elite of the warriors. Strong, wise and fast, this majestic bird symbolizes sharpness of mind and the ability to conquer any battle using strategy more than force.

They are in charge of the Tlalmanalli, which are the goods offered to the gods to receive from them a god fortune. The princesses were selected according to their virtues and beauty.
Adrian also told me about their desire to share with the world the richness of the Mayan culture, he said a phrase which I will always cherish: “Take Mexico with you, in your heart, and not only in your pictures.”
This will not be the last time I visit Costa Maya, next time I will make sure to say hello to my friends the Nahuales and learn more about their interesting culture by visiting the Mayan Ruins in Chacchoben.

The health and well-being of guests, staff and the communities where we operate has always remained our top priority. We’ve closely monitored information on COVID-19 in order to implement any operational and safety measures required to assure our commitment to guests’ enjoyment and wellbeing.

It is with great sadness that we have come to the hard decision to temporarily suspend operations at Costa Maya Port starting March 19th and until further notice. We understand the impact that this may cause to your current travel plans, yet we hope that your next vacation will include a visit to our fun-filled adventure park. Your future trip could help the thousands of families that depend on our industry recover more quickly.
As the impact of COVID-19 continues to evolve, please know we remain committed to providing you the exceptional experience and service. We will see you soon!